MOBILE, Ala. — Members of the Mobile County Health Department’s S.W.A.T. (Students Working Against Tobacco) program had the opportunity to meet with Mobile Mayor Sandy Stimpson this morning at Mobile Government Plaza.

The mayor took time from his schedule to learn about the group’s mission and to share his personal story about the effects that tobacco had on several members of his family. He applauded the students on their efforts.

S.W.A.T. students are recruited by a school sponsor to serve as peer tobacco prevention educators in elementary and middle schools, with a focus on students in fourth through eighth grade. It is part of MCHD’s Community Prevention Programs department under the Prevention & Wellness directorate.

Mayor Stimpson had presented the S.W.A.T. team a proclamation on April 1 in observance of national Kick Butts Day. Today’s meeting was in preparation for the annual Kick Butts Challenge, which is set for Friday at Mattie T. Blount High School in Prichard. 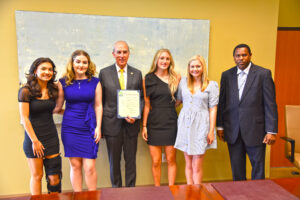 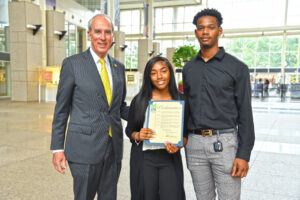