MOBILE, Ala. — The City of Mobile wished “fair winds and following seas” to the USS Mobile (LCS 26) today as the ship departed for its homeport of San Diego, Calif. The Mobile County Health Department’s Cannon Team was present to render honors as the Independence-class littoral combat ship left its berth at Austal USA shipbuilding.

On February 21, 2020, the Cannon Team fired a volley to welcome the USS McFaul (DDG 74) as it arrived for Mardi Gras. City officials asked that MCHD return once again to Cooper Riverside Park to salute the U.S. Navy crew.

Despite a heavy downpour just as the ship was leaving, the MCHD Cannon Team managed to send the sailors off with a bang. Mobile Mayor Sandy Stimpson did the honors of firing the cannon.

In 2016, an initiative called “MCHD Declares War on Physical Inactivity” began. Dr. Bernard H. Eichold II, Health Officer for Mobile County, points out Alabama has one of the highest percentages of obesity in America. By using the cannon as a starting gun at races such as the Azalea Trail Run and Mobile Marathon, it encourages local residents to go outside and enjoy our beautiful surroundings while exercising.

The Lyle Line-Throwing Cannon, which has a 2.5-inch-diameter barrel, was manufactured in the early 1900s by Coston. It is not a replica, reproduction, or toy. The cannon was designed to fire a projectile attached to a rope to a “man overboard” victim.

Any other groups interested in having the MCHD Cannon Team attend their event should contact the Office of Communications by calling 251-690-8823 or via email at mbryant@mchd.org. 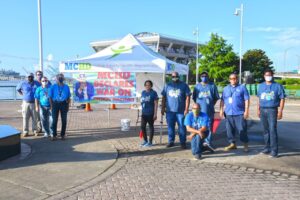