MOBILE, Alabama — The Mobile County Health Department’s Cannon Team made its first outing of 2022 this morning by marking the start of the Old Mobile 8K race sponsored by the Port City Pacers. A large contingent gathered at Colonial Fort Condé in Downtown Mobile to either participate in the race or to cheer on the competitors.

In 2016, an initiative called “MCHD Declares War on Physical Inactivity” began. Dr. Bernard H. Eichold II, then serving as Health Officer for Mobile County, pointed out that Alabama has one of the highest percentages of obesity in America.

Dr. Kevin P. Michaels, who assumed the position of Health Officer on March 1 of this year, has supported the mission of the Cannon Team. By taking part in activities such as the Old Mobile 8K, it encourages local residents to go outside and enjoy our beautiful surroundings while exercising.

The Lyle Line-Throwing Cannon, which has a 2.5-inch-diameter barrel, was manufactured in the early 1900s by Coston. It is not a replica, reproduction, or toy. The cannon was designed to fire a projectile attached to a rope to a boat or a victim in distress. Now it used to inspire those seeking a healthier lifestyle.

Derrick Scott supervises a team of MCHD employees that has been trained to safely use the device. Joining him on Saturday were Pebbles King (who fired the cannon), Tommy Busby, Edward Franklin, Vanessa Kemp, Veronica Mercadel, Patricia Poellnitz, Mansi Rawat, John Richardson, and Henry Wright.

Any other groups interested in having the MCHD Cannon Team attend their event should contact the Communications Office by calling 251-690-8823 or via email at mbryant@mchd.org. 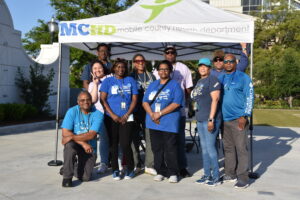