MOBILE, Alabama — Once again, the Mobile County Health Department (MCHD) is taking part in the U.S. Marine Corps’ Toys for Tots campaign. The mission of the program is to collect new, unwrapped toys during October, November, and December, and to distribute the toys as Christmas gifts to less fortunate children in the community.

For the last 14 years, employees with MCHD and Family Health — its primary care division — have had the opportunity to purchase tickets that allow them to dress casually on Fridays between Thanksgiving and Christmas. Proceeds from the tickets are then given to the Marines in order to buy the toys.

MCHD’s Employee Association partnered with Social Services for a ticket sales blitz and giveaway drawings to help make this year’s donation successful. And what a campaign it has been!

Carol Cannon, who oversees the Social Services program at MCHD, said this has been the health department’s most successful campaign. She was able to give the 3rd Force Reconnaissance Company, 4th Marine Division, based in Mobile a check for the largest amount yet.

“Our Toys for Tots was a huge success this year,” said Cannon, who added that over the last decade MCHD has donated more than $21,000 to Toys for Tots. “Despite the trying times in 2021, we were able to raise $3,161 this year. This exceeded last year’s total by $500.

“I would like to thank all the volunteers who assisted in setting up the program and selling tickets and collection of money. The money will be mailed to the Toys for Tots address for their use to fund next year’s campaign.”

In 1947, Major Bill Hendricks of the Marine Corps Reserves founded Toys for Tots in Los Angeles, California. More than 5,000 toys were collected during that campaign, with the first toy being a handmade doll.

To learn more or to make donations, visit https://mobile-al.toysfortots.org/ 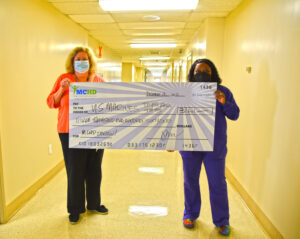