MOBILE, Alabama — For more than 25 years, the Mobile County Health Department’s Vector Services has monitored sentinel chickens placed throughout the county to help detect the presence of viruses carried by mosquitoes.

The process began again last week as MCHD received 100 newly hatched chicks. A special facility houses the flock at Vector Services (a vector is any insect, rodent, or animal capable of harboring or transmitting diseases to humans) in Downtown Mobile.

Each day the staff will feed the baby chicks, put in freshwater, and clean the cage that is heated by lamps. This process will continue until the chicks can be moved into the larger hen house located on the grounds at Vector Services.

It takes several months for the chicks to mature enough to be placed in the field. Vector Services staff said it would likely be May or June before these chickens are put into service.

Once mature, the chickens are vaccinated for fowl pox, and the initial blood draw is made to ensure they test negative for any diseases. At that point, the hens — roosters are not included in the study — are banded for identification and tracking purposes. The birds are dispersed to 13 coops located in various predetermined locations throughout Mobile County.

Blood samples are collected weekly from the wings of two hens at each location, usually on Mondays. MCHD processes the blood samples and sends them to a lab in Tampa, Florida. Tests results are available later that week. The tests can reveal the presence of Eastern Equine Encephalitis, West Nile Virus, and St. Louis Encephalitis.

With the use of 13 coops, only 52 hens are used at one time. The rest are kept in reserve. If one tests positive for a disease, it is removed from the field. If two birds from the coop test positive, all four birds are replaced.

MCHD began a project with the University of South Alabama in 2018 to test adult mosquito samples. This expanded disease detection to include Zika, Dengue, and Chikungunya using high-throughput molecular methods.

The program continues into the fall, usually ending in November. At that point, the hens are given away to the general public on a first-come, first-served basis. A new group of 100 chicks will start the program the following spring, as it did last week. 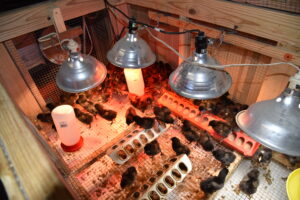 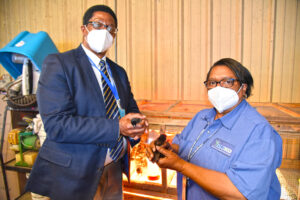