Self Esteem is today’s theme for Mental Health Awareness Month

MOBILE, Ala. — The Mobile County Health Department’s Health Equity Office is recognizing May as Mental Health Awareness Month. This week’s article – submitted by Outreach Education Skandan Ananthasekar – has a theme of “Self Esteem.”

We know that mental health is a critical component of our overall wellbeing but many in our community are faced with the reality of living with mental illness.

In addition, racial, gender, and sexual minorities often suffer from poorer mental health outcomes due to multiple structural level factors. Especially during the past year, the COVID-19 pandemic has put a strain on people’s mental health whether that be because of the loss of a loved one, social isolation, or financial burdens.

All of this highlights the importance of raising awareness about mental health, fighting stigma, educating our community, and advocating for policies that reduce barriers to mental health treatment.

One part of our mental health that is often not examined is our self-esteem or how it is we feel about ourselves. People with low self-esteem have negative feelings about themselves which has been linked to mental health issues and inadequate quality of life.
Negative relationships can lead to negative perceptions about how we feel and think about ourselves. Low self-esteem has been linked to addiction, as people use substances as a form of escapism from how they feel about themselves. Finally, low self-esteem can be present with mental health conditions such as depression and anxiety and might develop because of the stigma surrounding mental illnesses. This further highlights the importance of normalizing conversations about mental illness and spreading awareness about mental health.

Building a healthy lifestyle is a first key step because valuing our minds and bodies can help build physical and emotional confidence. As a result, exercise, a healthy diet, and meditation can be an important first step to building self-esteem. Feeling supported and loved and being able to offer the same in return is another key step. Fully engaging with those we love such as friends and family, volunteering, or joining support group can help.

However, changing deep rooted feelings about yourself is not easy and sometimes professional help in the form of therapy is needed. Resources available to our community include:

MOBILE, Alabama — The Mobile County Health Department’s Cannon Team made its second outing of 2022 this morning by marking the start of the Double Tunnel Vision 5K race sponsored by the Lions Club of Mobile.

Proceeds from the Double Tunnel Vision 5K will benefit the sight programs of the Lions Club of Mobile. To learn more about this program, please visit www.lionsclubofmobile.org.

In 2016, an initiative called “MCHD Declares War on Physical Inactivity” began. Dr. Bernard H. Eichold II, then serving as Health Officer for Mobile County, pointed out that Alabama has one of the highest percentages of obesity in America.

Dr. Kevin P. Michaels, who assumed the position of Health Officer on March 1 of this year, has supported the mission of the Cannon Team. By taking part in activities such as this race, it encourages local residents to go outside and enjoy our beautiful surroundings while exercising.

The Lyle Line-Throwing Cannon, which has a 2.5-inch-diameter barrel, was manufactured in the early 1900s by Coston. It is not a replica, reproduction, or toy. The cannon was designed to fire a projectile attached to a rope to a boat or a victim in distress. Now it used to inspire those seeking a healthier lifestyle.

WKRG-TV recently spotlighted the Cannon Team’s mission. The episode can be viewed at this link — https://www.wkrg.com/whats-working/whats-working-boom-blasting-off-to-good-health/

Any other groups interested in having the MCHD Cannon Team attend their event should contact the Office of Communications by calling 251-690-8823 or via email at mbryant@mchd.org. 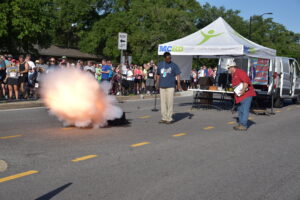 MOBILE, Ala. — The Utilities Board of the City of Bayou La Batre has reported a Sanitary Sewer Overflow that occurred on May 6. The cause was a power outage.

A discharge estimated between 1,000 gallons and 10,000 gallons took place from a manhole on Shell Belt Road near Waterfront Seafood. The overflow reached a drainage ditch that eventually empties into Bayou La Batre. The affected area was cleaned and disinfected.

Dr. Kevin P. Michaels, Health Officer for Mobile County, advises area residents to take precautions when coming into contact with any standing water that may have accumulated as a result of this overflow. Those who have come into direct contact with untreated sewage are advised to wash their hands and clothing thoroughly.

Area residents should take precautions when using Bayou La Batre for recreational purposes because of this overflow. All seafood harvested in this general area should be thoroughly cooked before eating. People should wash hands after cleaning seafood and before preparing food.

The Parent Project is a parent training program that teaches curriculum for parents raising difficult or obstinate children. This project has worked with more than half a million parents to provide education and techniques for raising strong willed children and adolescents.

Training took place over a four-day period where employees were educated on program facilitation developed by the Parent Project Founders. During the training, staff functioned as parents for the first three days before presenting the curriculum as a facilitator on the final day.

After the training course was completed, each staff member received certification qualifying them to facilitate the Parent Project Curriculum. With the information received from this training, Community Prevention Programs department staff will continue to better educate the community and strengthen families throughout Mobile County.

MOBILE, Ala. — Every year, the Mobile County Health Department (MCHD) joins the national movement to honor May as Mental Health Awareness Month. This time is a perfect opportunity to raise awareness about mental health, fight stigma, provide support, educate the public, and advocate for policies that support people with mental illness and their families.

Since the start of the COVID-19 pandemic, more people are talking about mental health. In fact, data collected by MCHD’s Health Equity Office (HEO) indicates that the most important health issue in Mobile County is mental health. Despite this increased awareness, mental health conditions, resources, and conversations can still feel complicated and out of reach.

The COVID-19 pandemic has had a major effect on our lives. Many of us are facing challenges that can be stressful and overwhelming. Further, communities that have been historically and presently oppressed face a deeper mental health burden because of the added impact of trauma, oppression, and harm. Learning to cope with this stress in a healthy way will help you, the people you care about, and those around to you become more resilient. Consider the following techniques:

It is important to know that, while these tips can be helpful, they are not your only resort. If your symptoms of stress and anxiety are interfering with your everyday life, it may be time to talk to a professional. You are not alone—help is out there, and recovery is possible. It may be hard to talk about your concerns but simply acknowledging to yourself that you are struggling is a significant step. Resources available to our community include: